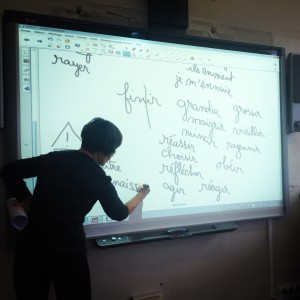 I had a Proustian moment at the Alliance Française recently. Our professor was explaining the plus que parfait, the pluperfect form of a verb. Suddenly, it was 47 years earlier. I was at the Collège Cêvenol, a boarding school in Le Chambon-sur-Lignon, a small town in the mountains of central France. We were dutifully studying (you are always a dutiful student in France) verb tenses.

We had done the passé composé (simple past) and the imparfait (imperfect). Now, in 1966, we were tackling the third past tense, the plus que parfait. I can hear the scratch of chalk on the blackboard and the clank of the heating pipes. I can see my compatriot “étrangers” – non-French speaking students – in rows around me. This was a special class for the foreign students attending Cêvenol. I can smell the particular odor of the old school building. And I can remember the “frisson” of pleasure as the meaning of “pluperfect” clicked into place.

Above, my Alliance professor Antoinette writes out irregular verb forms.

So it was in my class at the Alliance the other day. I haven’t thought about French verb tenses in decades. Here I was reviewing them in a polyglot class of Polish, Spanish, Vietnamese and Swedish students (see Sam’s post for an explanation of the mix of students at the Alliance). I was struggling to construct a sentence in French where we used all three forms of the past tense. And remembering with perfect clarity, as Proust does with his taste of a Madeleine, a similar moment from so very long ago.

Paris does that to you: stirs up your past, your whole life, or in my case almost half a century. Or perhaps I should say re-learning French does that to you. It gets into the furthest recesses of your brain. It’s not always a comfortable experience.

The first week we were in Paris, I chortled to Sam that my French was rushing back and I was beginning to feel fluent again. The second week I ran into a mental block. I felt tongue-tied and awkward as I tried to incorporate new vocabulary, correct verb forms and, most bedeviling, the correct pronouns. It turns out I never learned those properly. And there’s a lot more to pronouns than remembering “le” or “la” for masculine or feminine nouns.

But enough with the grammar. We have been in a state of extended sensory overload the past few weeks. It may sound wonderful but it has also been challenging. There is so much to remember and to feel. Impressions and memories overlap and blend. First, there is my experience as a child in boarding school in France (I loved it). Beyond that, there is the palpable history of Paris during the Occupation of World War II. It is everywhere you turn.

Interestingly, le Chambon-sur-Lignon (where I went to school) was a center of resistance during WWII. In Paris, the distinctive wailing of French police cars recalls the Gestapo (perhaps I’ve heard this sound in films). There are statues and plaques of resistance heroes in every square. Most affecting are the plaques outside each school in the Marais (the old Jewish quarter of Paris), specifying the number of French children rounded up by the Vichy government and the Nazis – and subsequently murdered. 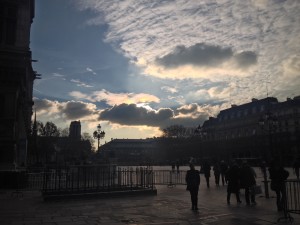 So while Paris is the City of Light, it has its dark corners. The sun rarely peaks beyond the clouds. Paris is mostly gray. It is unrelentingly cold and raw. But when the sunlight breaks through, it strikes the nineteenth century buildings lining the Seine and they are magnificent. We envisioned a permanent state of enlightenment during our five-week stay, but we have discovered that Paris isn’t always la vie en rose.