So World Domination Summit 2014 is over. It does seem to represent a milestone in the Gap Year calendar. Walking away from my hospital for the last time at 5:00 PM on May 31, 2013 was the defining moment of my alternative career. But surrounding myself with the WDS crowd for the second year in a row is part of the sea change I’m looking for.

Devoted to creating “remarkable lives in a conventional world” and emphasizing community, adventure and service, the WDS profile might not appear to fit my former career of conformation. As you will recall, I went to the hospital in a jacket and tie every day for 32 years. But there is a lot of adventure in a medical career (if you are willing to define life-and-death work as adventurous), there was a lot of “community” in my devotion to supporting the hospital and there is a lot of service in a mission-driven medical practice.

WDS2013 kicked off a career of travel, adventure, study and reflection. #WDS2014 is focusing my sights on new adventures, a different community and alternative service. 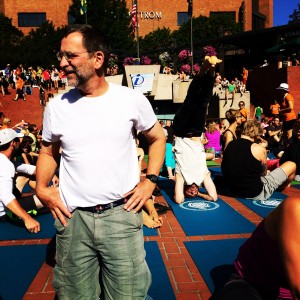 Just to show how much I have evolved I will admit to wearing cargo shorts and flip-flops at WDS on one occasion. In principle, I am opposed to flip flops as they are so inadequate if physical exertion is needed. But they worked for participating in the record-breaking Great Namaste, the world’s longest yoga chain (see photo). For one day I went without a wallet or nerd pack and was financially armored with only my debit card.

Random highlights include reflections on Jonathan Field’s Revolution U. He outlined steps or strategies used by political leaders to foment revolution and suggested applying them to commercial enterprises and product launches. This got me to thinking: why not foment for a healthcare reform revolution starting with consumers? One of the lessons of Obamacare is that true change will not come from above.

Speaker A. J. Jacobs described a year of living by all the rules outlined in the Bible and another period by the 110 rules of life that George Washington established for himself. Curiously, George’s second rule (numerically and, therefore, possibly in terms of importance) was to not rearrange one’s private parts in public. Another was to maintain perfect posture. Two hundred and fifty years ahead of his time, Washington understood that good posture and power stances inspire confidence within and without. The earliest documentation of “fake it ’til you make it.”

One attendee’s story was that of a young woman describing her diagnosis and treatment of thyroid cancer. She described her entrepreneurial approach to raising $12,000 needed to pay for medical expenses not covered by insurance. Why should her insurance company deny coverage? Where is the outrage? 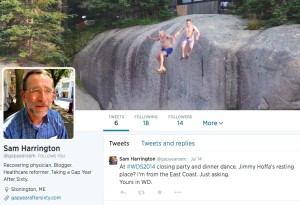 I am looking forward to a summer of community in Stonington, meeting my high school mentee and rehearsing for my comeback on the musical theater stage in the Stonington Opera House’s original production of The Last Ferryman. (I am in the men’s chorus so it is not a major role. But there is a major amount of rehearsing, an average of five hours a day.)

I am looking forward to the increased pace of the Maine gubernatorial campaign and am hoping to have a positive influence. Finally, I hope to explore the online community to foment a bit of revolutionary thought in healthcare reform. More on that later.

I am sitting up straight. I adjusted my junk before starting this note. I am feeling a bit of outrage. Onward.