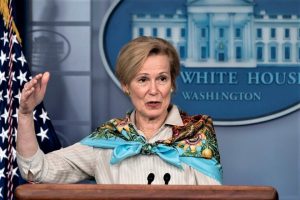 {Update from Sam} If you’ve been scratching your head about Dr. Birx’s math following the CNN Special about the COVID war inside Trump’s White House, you’re not alone. We already knew that the pandemic response was dysfunctional and that poor everything (messaging, coordination, testing, truth-telling, leadership, etc.) led to countless lost lives.

But how many lives?

It is impossible to say in absolute numbers, but a few disparate observations will help understand how we could have done better and (without a confusing statistical analysis) might give us some consensus around excess COVID deaths.

First, as a nation, we know that we did not do very well. On the other hand, it is hard to find a true comparable of a Westernized country that successfully contained its population while coming out of a “lockdown” and thus successfully prevented a surge of cases. Australia and New Zealand might fall in this category but as island nations, they have the advantage of better border control and a history of greater respect for centralized government. But some form of comparison is necessary to judge our performance.

There are three corollaries to my assertion that we can best assess our performance by way of comparison with others. First, we are working in the vacuum of a 100-year pandemic without an opportunity for self-comparison. Second, in very broad terms as a nation we can assess our performance in terms of total cases and total deaths per capita and by these measures we did not do well compared to most Western countries. Third, on a smaller scale, because we physicians in our own hospital systems do not have real time access to national numbers (or numbers from other hospital systems) regarding month-to-month performance (deaths/hospitalization, ICU mortality, etc.) we cannot say, “Our hospital system A has a COVID mortality rate of 44.2 percent, but their hospital system B has a mortality rate of 42.4 percent – how can we improve?”

On a national scale, having reliable and positive comparative data inspires populations to continue mitigation programs because we, the citizens, can see the benefit. On a professional level, doctors and nurses care about who is dying in their hospital, in their ICU, and on their shift; and if those healthcare professionals can see progress, they will be inspired to redouble their efforts.

For my own part I’m interested, as I have written before, in the ICU mortality rate for elderly patients. This is because I believe that if elderly patients understand the true cost of ICU care, many of them will choose to decline it. To this end, I have been Googling around the Internet, and in particular on the CDC site. To my chagrin, I found no such reports. This is largely because the U.S. lacks an automated, real-time data center, instead relying on individual systems to report to data bases like the CDC where the information is distilled and collated before being disseminated months later.

The UK Has Real-Time Data

On the other hand, the U.K. does have such a real-time data collection process and their data are informative.

According to Britain’s Intensive Care National Audit Research Centre (ICNARC), the overall ICU mortality for COVID patients admitted from September 2020 to February 2021 is 41.6 percent. This compares unfavorably with the previous six months in that there was little decline in mortality as treatments improved. Indeed, mortality increased in some categories during the more recent six-month interval.

But I want to make three other points.

First, according to ICNARC, the ICU mortality rate for the average viral pneumonia is 22 percent. COVID nearly doubles that. Second, there has been a stable mortality of 5.7 percent of patients who die after discharge from the ICU and before discharge from the hospital. And third, the ICU mortality rate for COVID patients over the age of 70 and requiring mechanical ventilation is 71.4 percent (81 percent if kidney failure is involved).

All of this sustains my previous point that if an elderly patient develops severe COVID, requiring intubation in the ICU, the outcome is awfully bleak and that ICU care might seem too high a price to pay just to come out the other side in a diminished state.

Another important factoid, largely unheralded and published just this January, comes from our Veteran’s Administration system. It shows that the risk of dying in the ICU more than doubles when the system is stressed by a surge. This is reinforced by the British experience that their mortality rate climbed as their resources were stretched and stressed despite improved treatments. This data alone should inspire people to try to suppress surges through all recommended mitigation practices.

As of this date, 531,675 people in the U.S. have died of COVID. Most of these deaths involved hospitalization and most severely ill, hospitalized patients spend time in the ICU.

Combining all these points, that baseline COVID mortality for severe disease is high, that severe disease frequently involves ICU care, and that ICU mortality is doubled when ICUs are running at 75 percent of capacity, it is easy to understand Dr. Birx’s assertion that hundreds of thousands of deaths could have been prevented by controlling ICU crushing surges with better mitigation and a slower, better controlled re-opening of local economies.

View all posts by Sam Harrington →
It’s Time to Take to the Streets: The Green New Deal could save the planet for our grandchildren
The Controversial Approval of Aducanumab: Beneficial Treatment or Grift?

One Response to Was Dr. Birx correct about excess COVID deaths?