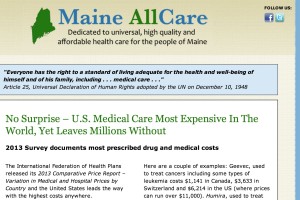 I’ve been reaching out to healthcare reform leaders in Maine. The result of one such effort was an unexpected dinner invitation to the home of Philip Caper, M.D. and his wife Karen Foster in nearby Brooklin, ME.

I had emailed Phil blindly, using the email with which he ends his regular guest column for the Bangor Daily News. I was hoping to arrange a business meeting and to pick his brain about opportunities in the world of healthcare reform. I was surprised and pleased when he responded to my email. And even more surprised when, after reviewing this blog, he invited us to dinner at his home. It was the ultimate blind date.

It proved to be a pleasant and eye-opening evening. Karen, a former insurance administrator and current reform advocate, produced a delicious meal. We talked “healthcare” most of the evening and “coast of Maine living” for the remainder. We have clearly been drinking the same Kool-Aid.

Which phrases about universal coverage “resonate”?

One of the standard bromides came up: “To be fair, doesn’t everyone deserve access to the best health care?” This is regularly promoted as one of the tenets of universal coverage and is the foundation for such coverage in the former monarchies and now the developed countries of Western Europe where the social covenants are more advanced than in the U.S.

I offered that I was in general agreement but expressed hesitation at the phraseology. Most Americans have an aversion to government intervention when the private sector is presumed to be capable of performing better. Most Americans reflexively hear “government take-over” when they are asked to consider “universal coverage.” I was no exception.

However, I have come to the conclusion that the private sector has failed to create a functional system. Moreover, I know that all of the successful systems in other developed countries have various degrees of government intervention though none of them are as “socialized” as our own, comparatively successful, Medicare.

What do best, fair and “deserve” mean?

I am uncomfortable with this standard phraseology because of quibbles with the vaguely misleading, and to me offensive, qualities of “fair” and “deserve” and the impossible-to-value meaning of “best.” There is nothing fair or deserved about illness when it befalls one, nor is there anything fair or deserved about the unpredictable course of treatment that access to healthcare affords. And how can we know what is “best” when even bedrock programs like annual mammographies are demonstrably misunderstood and possibly misguided?

I come to the conclusion that universal coverage must be the ultimate end point from the caregiver’s perspective – not from the patient’s perspective.

It is obvious to all that no single physician can care for every patient’s needs through their lifetime and that chronic disease management, even a single acute illness, requires multiple experts to optimize care. It is therefore evident that a team approach with access to physicians, nurses, equipment and medications requires both community resources (to “provide”) and patient resources (to reimburse) in order to maintain a healthcare system.

I feel it is my moral responsibility to treat everyone to the best of my ability. Further, it is antithetical to the Hippocratic oath to take advantage of the illness, to profit unduly and to place the business of medicine before the caring for patients.

But most importantly, as a physician I feel it is my moral duty to care for every single patient who presents themselves to me. Without resources I cannot care for anyone in a meaningful way.

By way of a concrete example let me define this conundrum. If an uninsured patient shows up on my doorstep passing burgundy stool and describing a history of NSAID use, the likely problem is a bleeding ulcer. As a solo practitioner I can care for them at no cost to society by offering free advice (“stop taking NSAIDs”) and free compassionate care (“let me hold your hand”). But to save this person from bleeding to death I need the resources of an ICU and an endoscopy suite with doctors, nurses, technicians, scopes, needles, clips, monitors, labs, transfusions, etc.

Isn’t it the American way to take what you can?

When I rail against the profit-taking and commercialism of American medicine I am occasionally chided by others. Some say it is the American way to take what you can. They say that our young democracy did not envision the social covenants of our European cousins as they moved out from under the control of monarchies. To this I respond, “What about the Judeo-Christian heritage of caring?” “What about equal opportunity?” “What about the American commitment to equality – and not to aristocracy?”

No matter how we get to universal coverage, no matter what mental exercise helps us rationalize the pathway, it is clear to most thinkers that it is the ultimate end game. No one has offered a viable and ethical alternative. Therefore, let us stop second guessing this goal. Let’s vote as individuals to make universal coverage happen sooner than the current politicians have the courage to effect.

View all posts by Sam Harrington →
You CAN Compare Physicians: An Insider’s Guide
The Agony and the Ecstasy of Downsizing and Leaving D.C.

3 Responses to What Is “Fair” When It Comes to Healthcare?