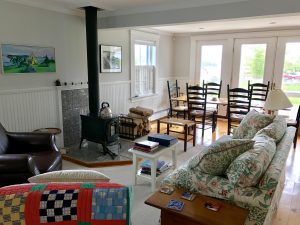 Today is day eight of Year Five of this gap year experiment. If there’s a theme, it’s one of gradual acceptance of aging along with an increasing appreciation of the power of words.

If there are surprises, perhaps it’s that Sam and I are still happily married after so much time in each other’s company – !

We spend a lot of hours in the living room / dining room / kitchen you see in this photo. The kitchen is just out of the frame. It’s a fraction of the size of our former living spaces in D.C. Even the wood stove is small. I wish it were bigger but there isn’t room. And yet it’s enough.

Enough is a word with a lot of power. Especially on cold, gray days in Stonington when the world is muzzled in fog. Is this enough? Sometimes it is. Quiet and calm are a good thing. Raw, cold weather is not. We’re told it’s been a slow spring here with lots of rain and chilly temperatures.

The urge to get settled

We just arrived back after almost four months in Brooklyn and I’m finding it hard to settle into the zen-like rhythm of our days here. Settle is another interesting word. When you’re settled, it’s usually enough. I went to the Thursday morning meditation group up the road. It’s a small group that meets once a week with one person designated as leader. He or she reads a poem or a passage from an essay, chosen to reflect what they are thinking about. Then we meditate, sitting in chairs in a close circle, for 15 minutes. That’s long enough to be comforting and calming.

The leader last week was a graceful woman in her 70s. She was newly arrived back to Deer Isle and told us she was also having trouble settling in. We all want to settle, I think. Merriam Webster defines settle, the transitive verb, as “to fix or resolve conclusively” or “to arrange in a desired position.” The intransitive meaning is “to become quiet or orderly, to take up an orderly life.”

All those meanings apply when I think about what has driven me over the past four years. I have a deep urge to be clear, calm and confident. It’s hard enough to do that in ordinary times. But in this crazy period of Trump as President, it’s harder than ever. A private urge to settle, to get comfortable and clear, gets mixed up with the nation’s desire to settle down and make sense of the chaotic and nonsensical pronouncements coming out of the White House.

And that’s where the power of words comes in.

I know what Sam and I have used this blog for. For Sam it has been a proving ground for his voice on end-of-life issues and decision-making. For me, recently, it is a place to talk openly about depression as a way to dispel the stigma around it. I haven’t said nearly enough on this topic. I will be writing more. 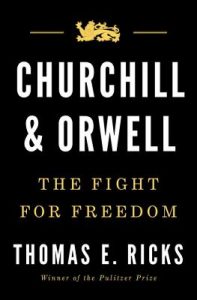 I’m reading Deer Isle neighbor and friend Tom Ricks‘ newly-published and New York Times best-selling Churchill & Orwell: The Fight For Freedom. It’s eerily illuminating on the topic of the power of words. Churchill, as an orator and writer, and Orwell, as a writer, possessed an uncanny ability to move millions to action (in deed or thought) with the clarity of their words.

In contrast, the words coming out of the White House leave many of us in confusion and despair. What you say as a leader or speaker or writer trying to make sense of the world for everyone else really does matter.

From the New York Times’ review:

“For both Churchill and Orwell, language mattered at every level. “Even while overseeing a sprawling war of survival,” Ricks notes, “Churchill paused to coach subordinates on writing.” During the Battle of Britain he issued a directive on brevity, ordering his staff to write in “short, crisp” paragraphs and to avoid meaningless phrases. “Most of these woolly phrases are mere padding,” the prime minister complained, “which can be left out altogether, or replaced by a single word.” Anyone who has read Orwell’s famous six “elementary” rules on writing, including “ Never use a long word where a short one will do,” knows that on this matter the two men were of one mind.”
– quoting from the NYT and Tom Ricks‘ Churchill & Orwell

And then there are Churchill’s speeches. Tom reminds us that after the evacuation from Dunkirk in June 1940, one of the worst days in British history and a low, confused point of WWII, Churchill made one of his most famous speeches before the House of Commons:

Just typing those words gives me the chills. It’s easy to see how Tom immersed himself in the language of Churchill and Orwell, and in this urgent period of history, for the three years or more it took him to write this book. Bravo Tom Ricks and thank you for this prescient book.

The little things are the big things

Finally, to return to the topic of marriage, as with most of life the little things are the big things. Holding hands, a hug, taking a walk together, listening. We’ve both worked hard on these things and I can report that it improves a relationship.

We left D.C. in June 2013 so this is the start of Year Five of what is proving to be an odyssey more than a “gap.”